Curiosity – Or How the World Has Ended While Nobody Noticed…… 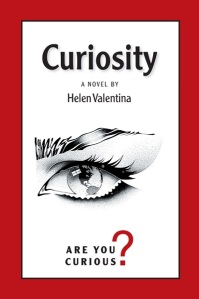 I’m very excited to announce that Curiosity, my second novel, is now available on lulu.com as a paperback POD or as an ebook. The link to learn more, and purchase if you wish, is my lulu.com author spotlight at:

As I’ve blogged about before, Curiosity is very different from my first novel, The Seed. The first novel was a passionate, heavy, introspective, character driven dark romance. Curiosity is lighter, though the humor is dark.  It’s a satire of aspects of our modern media age.

Curiosity tells the story of a (somewhat) benign sociopath – Peter Graham – who believes the world has already ended and no-one noticed. He believes at the moment the world dissolved into the current state of chaos and meaninglessness, everyone had one essential characteristic remaining to them. His is curiosity. And his curiosity drives him to do something which inadvertently makes him one of the most comprehensively mis-understood ‘heroes’ of the modern media world. What follows from that is satire about the media, politics, bureaucracy, public policy and the internet.

One of the key elements of Curiosity is excerpts from Peter’s journal where he chronicles his ‘proofs’ that the world has ended. These are the things we might notice about our deconstructed world if we really thought about it – things that suggest that life as we thought we knew it is no longer there.

As part of blogging promotion for this novel I’m going to write a few more proofs – not the ones from the book (you’ll have to read it for those!! 😉 ) but to give the idea of his thesis.

What I’m hoping is you might respond – in comments or on your own blogs – with proofs of your own, if this inspires such thought.  🙂

So, to get things rolling, here’s a couple of proofs that the world has ended and nobody noticed:

Proof That The World Has Ended: Unemployment Statistics

This is a cunning proof that implies there are actual figures for actual levels of unemployment that actually mean something. Of course, nothing can really mean anything in a non-existent world, but we hold on to the chimera that suggests it can, and things like employment – given they determine how much money we have to spend and the life we want to enjoy – cause great anxiety. And because of that, they also have significant implications for whatever political party governs us.

So governments and the recruitment industry create the ‘story’ of figures. It’s one part government statistics, one part the number of jobs advertised, one part how many people actually line up for employment benefits, and one part sugar and spice.

Because the statistics lie – ALL statistics lie – the number of jobs mean nothing.  One job may be advertised by a number of recruitment agencies, some jobs aren’t even real and are advertised to get resumes to recruitment firms, and some are just fishing expeditions or quasi promotion from businesses wanting to imply they are growing in comparison to competitors.  And as for those collecting employment benefits, depending on the country you are in, there are limits to timing, to level of personal assets and so forth that also limit the numbers.

So when you put all that in the melting pot and come out with a figure, it essentially means…nothing.

Which is entirely appropriate for a world that no longer exists. But it is cunning as I said because it suggests one still actually does, that we can work productively in it and that we can actually really measure anything. All of which is a lie.

No wonder they say ‘lies, lies and damned statistics’….

Or another proof, just to illustrate the concept a bit more:

Proof that the World Has Ended: Reality Television

I love the term ‘reality television’. Given that it describes a completely fabricated, scripted ‘reality’ on a medium that is all about distortion and fantasy. The irony inherent in the title is the give away about the proof, but it’s also just wonderful in and of itself.

Reality contests where the voting is rigged or the outcome is manipulated by the judges. Reality ‘voyeurism’ shows where narcissists knowingly let themselves be watched doing things aimed at either keeping them on the show or creating a mini-celebrity for themselves.  Dating shows that are designed to bring out the worst in daters, which is hardly the real object of dating one would have thought. Cooking shows that suggest that there really is culinary skill required in the non existent world…..

And we lap them up. They are cheap to make and we watch them in droves. We know they aren’t real, and underneath we are quite content because we really know, in our souls, that nothing is real anymore.

So reality television is exactly what is says it is – in a way it isn’t ironic at all – it shows us, day by day, show by show, what the ‘reality’ of the world now is – ie, that there is no reality in the world anymore. None at all. So that’s just a couple to give the idea. I do hope this inspires some – whether it just be examples without explanation in comments, or something longer.

So if this seems like fun please join in. 🙂  I’ll post more on and off over the next few weeks/months, so feel free to join in whenever you like.

I'm drawn to blogging as a way to share ideas and consider what makes us who we are. Whether it's in our working life or our creativity, expression is a means to connect.
View all posts by Helen →
This entry was posted in Air, Conversation, Fire and tagged Advertising, armageddon, black comedy, Book, Curiosity, Humor, indie book, novel, Politics, Reality television, recruitment, Satire, self published, television, unemployment, unemployment statistics. Bookmark the permalink.